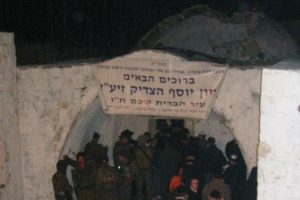 Three Israelis were wounded on Wednesday night in a shooting at Joseph’s Tomb in Nablus/Shechem.

Israeli forces and a civilian group they were escorting to the site came under “massive” Palestinian gunfire, the Israel Defense Forces said in a statement. Two civilians and one officer suffered light wounds in the attack. Israeli forces returned fire while evacuating the civilians, according to the IDF.