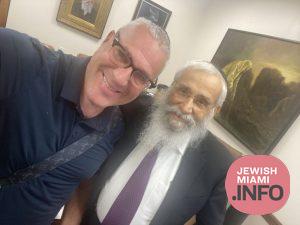 After founding the Shul of Bal Harbor in Surfside in 1982, Rabbi Sholom Lipskier has dug his roots even deeper into US soil. He has finally become a US Citizen.

According to a social media post from Michael Wildes, Rabbi Liskier has only recently taken the path to US citizenship, with Wildes as his representative.

Born in Tashkent, Uzbek Soviet Socialist Republic in 1946, Rabbi Sholom Lipskar was smuggled as a baby through the Soviet border to a Displaced person (DP) camp in Germany. Arriving in North America in the early 1950s, Rabbi Lipskar’s family settled in Ontario, Canada.

He was ordained as a Rabbi from the Lubavitch Yeshiva in Brooklyn in 1968, and in 1969, Lipskier was hired as the principal of the Landow Yeshiva School in Miami Beach, Florida. He served as principal of its elementary school for a number of years.

In 1982 Rabbi Lipskar founded The Shul of Bal Harbour in Surfside, Florida and has since led the congregation as its head Rabbi.

For Rabbi Lispkier, a lot is not enough, and he also founded the Aleph Institute, a non-profit national humanitarian organization dedicated to improving the quality of life for both prisoners and military personnel and their families.

“It was our honor to assist Rabbi Lipskar, a prominent rabbi that epitomizes the importance of immigration and safe haven in America,” Wildes wrote.