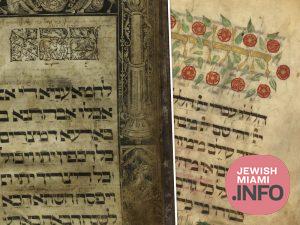 Some of History’s Most Exquisite Haggadot

Just in time for Passover, which begins on April 15th, some of the world’s most important and exquisite Haggadot are now available for download for free from the National Library of Israel (NLI), home to world’s largest Haggadah collection.

The Haggadah (pl. Haggadot) is the text read at the Passover Seder, the traditional holiday meal accompanied by the retelling of the story of the Exodus.

Jerusalem’s National Library of Israel holds some 15,000 editions of the text, including traditional and non-traditional versions, from hand-written manuscripts with stunning illustrations to rare and early printings, and modern adaptions. It also includes digital copies of rare Haggadot held in numerous collections across the world.

The select Haggadot offered for download span centuries and countries of origin, each with its own story.

The exquisite 15th century Rothschild Haggadah, for example, was illustrated by renowned Jewish artist Yoel ben Shimon in Northern Italy and stolen by the Nazis from the Rothschild family during the Holocaust. After disappearing for many years, it was eventually returned to the family who donated it to the National Library shortly thereafter.

Other Haggadot available for download include the 1556 Prague Haggadah, an early printed version of the classic text of which only two copies have survived; the colorfully illustrated 1738 Amsterdam Haggadah; an 18th century Haggadah printed in Hamburg with Yiddish translation; and others.

The NLI’s world-leading Haim and Salomon Judaica Collection includes the vast majority of Hebrew and Jewish books, journals and magazines ever published; thousands of Hebrew-letter manuscripts, as well as digital and microfilm copies of some 90,000 such manuscripts from collections across the globe; the world’s largest collection of Jewish music; and hundreds of personal archives of leading figures. Cherished treasures in the collection include Maimonides’ commentary on the Mishna in his own handwriting; ancient Talmud fragments; the world’s largest collections of ketubot and Haggadot; Hebrew books dating to the advent of the printing press; and the Gershom Scholem Library – the world’s foremost resource for the study of Kabbalah, Jewish Mysticism and Hasidism.

The entire NLI collection will soon move to the new National Library of Israel set to be completed adjacent to the Knesset (Israeli parliament) in Jerusalem this year.

According to Dr. Yoel Finkelman, curator of the Haim and Salomon Judaica Collection, “The National Library of Israel works tirelessly to make sure that our vast collection gets out of the ivory tower and out into the public. Making these haggadot freely available for use at anybody’s Seder, the NLI fulfills its mission as the Library of the State of Israel and the Jewish people.”

Additional Haggadot and other Passover treasures from the National Library of Israel available here.