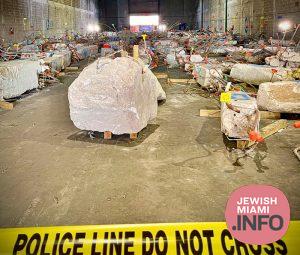 Surfside Collapse Investigation Prepares To Enter The Next Phase

The National Institute of Standards and Technology investigating the June 24, 2021, partial collapse of the Champlain Towers South building in Surfside, is preparing to begin invasive testing and preparation of physical evidence collected from the collapse site.

The evidence, including structural components such as concrete columns from both the collapsed and imploded portions of the building, has been preserved in a secure warehouse in Miami-Dade County. NCST experts have been carefully cataloging and analyzing the materials, as well as collecting detailed measurements and creating 3D models for further analysis. The next phase of the investigation will include an invasive testing program that requires the manipulation of the evidence, core drilling and cutting of specimens to collect samples, which cannot be fully accomplished in the tight confines of the current warehouse.

“Invasive testing will provide important information about the properties of the concrete and reinforcing steel and the potential roles those properties may have played in the collapse,” said Glenn Bell, co-lead of the investigation. “This is an important step in the investigation, one we are able to take only after months of careful investigation and preparation.”

In preparation for the move, sample extraction and testing, NIST brought in a board-certified industrial hygienist to conduct air sampling for asbestos fibers to ensure the safety of those accessing the materials. The process of preparing the materials for the move and then securing them in their new location is expected to take several weeks.

The team has also begun the next phase of interviewing those who may have information relevant to the investigation. The Evidence Collection Project team has developed questionnaires that will guide the interviews and ensure information collected from eyewitnesses or others familiar with the building and its history can be systematically analyzed.

Information gained from these interviews will further inform the other projects and the review of “failure hypotheses” that might explain what caused the collapse. Team members have been systematically determining what types of evidence and information are still needed to evaluate each hypothesis.

NIST continues to collect and review information from the public and encourages anyone with photos, videos or other information to submit their materials through the NIST Disaster and Failure Studies Data Portal.