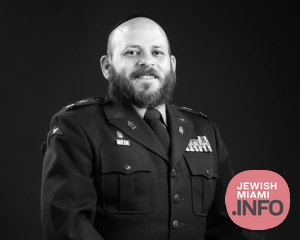 Menachem Mendel Stern, was born in Israel, and joined the US Army as a chaplain, in 2011.

Chaplain Stern has logged 6 deployments, 3 of those to Afghanistan, and others to Korea and other countries.

His favorite part of his job is when a Jew finds another Jew in the most unlikely places, such as a senior officer running into his shul in Afghanistan on Rosh Hashana right before shofar asking if he’s late for tekios. A Sgt who completely left yiddishkeit and was found at 40 in Afghanistan, when he found a fellow Yid as his Chaplain. At first this Sgt said he was not Jewish and then later at a seder he showed up and reconnected with his family and faith. This became an average day for Chaplain Stern and he can fill many volumes with such encounters.

As a Lubavitcher, Mendy’s push to join the Chaplains Corps was Shlichus oriented. He was recruited, and now recruits with, the Aleph Institute, helping Jewish soldiers and inmates with any religious needs they may have.

Chaplain Stern’s career is peppered with open miracles, in fact in his first deployment, his flight was delayed by 24 hours to Afghanistan. Upon his delayed arrival he was shown that the convoy that was set to pick him up 24hrs earlier was obliterated, taking the lives of 19 soldiers, minus the delayed Chaplain.
Mendy continues to serve his country proudly, serving as a religious authority, and Kiddush HaShem, wherever his career takes him.