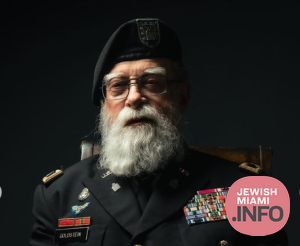 Beginning his military career in March 1977 as a 1st Lieutenant with the 101st Signal Battalion, he is the longest serving Jewish Chaplain in the US Military. He also serves as a Chaplain for the United States Secret Service, is an Assistant Commissioner of Housing for the State of New York, and sits on many boards and institutions.

A brief partial listing of Chaplain Goldstein’s service over the course of 38 years of active duty includes Operation Urgent Fury in Grenada, Operation Desert Storm in Iraq (where he read the Purim Megillah in one of Saddam Hussein’s palaces), and the JTF Patriot Defender Task Force in Israel. He also served several deployments to Afghanistan, Iraq and Kuwait, Bosnia, Korea, served at Guantanamo Bay, Cuba, was Joint Task Force Katrina Staff Chaplain and was Senior Chaplain at “Ground Zero” for all military branches and emergency responders assigned to the World Trade Center. He is the recipient of numerous medals and awards, and retired with honors in April of 2015.

Chaplain Goldstein and his wife Seema have 5 children, and they are the proud grandparents of many grandchildren. They reside in Brooklyn, New York.

Thank you @ahuva.fogelman for arranging and inviting us to photograph your father.