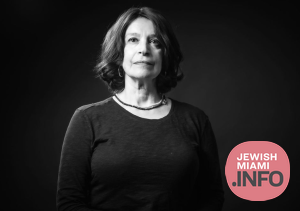 The Jew Project: Cynthia Kaplan-Shamash, A Jewish Iraqi Refugee and Author of “The Strangers We Became”

Cynthia Shamash was born in Baghdad, Iraq in 1963. Her father was head of a large company. After the Six Day War many Muslim countries took offense and suspicion to their Jewish citizens as being spies for Israel. In 1972, 9 year old Cynthia clutched her new doll as she was interrogated by the police, after the family tried to escape Iraq. Already at that age, Cynthia (or Sanuti as her mother called her) was composed as the officer aggressively interrogated the young girl and dismembered her new doll in search of a supposed “spy device”. Finding nothing, he dismissed Cynthia and she collected and kept the pieces of the doll, which she has until today.

After watching the public hanging of Jewish men, the family was forced to hide their Jewish Identity and try to flee the country.

Their home was ransacked, and her entire family imprisoned in Iraq. Upon their release, seeing Iraq down to its last 300 Jews, they spent months getting approved to go to Istanbul on “vacation”. From there, they fled Turkey to Tel Aviv, and then to Amsterdam, where Cynthia’s father passed away. At 12, Cynthia was sent to school in London. She then moved back to the Netherlands where she finished her dental degree. After living in 5 different countries by age 14, Cynthia moved to the US to start over.

Cynthia wrote her book “The Strangers We Became” to share her story with others going through challenging times.

Cynthia has become a delightful, and dynamic speaker, and has spoken at the U.N., to U.S. CBP at JFK, at colleges, law schools, museums, Jewish community centers and synagogues.

She published a NY Times op-ed on the future of the Iraqi-Jewish archives under President Bush. Cynthia also appeared on PBS, Tablet, and NPR.

Cynthia was elected to the board of the World Organization of Jews from Iraq in 2011.

When she is not on the speaking circuit, Cynthia can be found treating patients in her dental practice in Queens, NY, spending time with her husband and five children or working on her second book.