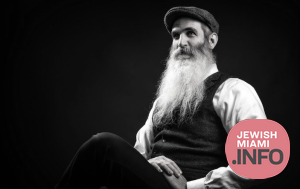 David is a chazzan, sommelier, mixologist, and vocal coach, but the origins of this unique Lubavitcher are not what you may expect.

David grew up in CT in an ex-hippy family. The religion consisted of Chanukah candles, and “sometimes” a Seder.

At 15, the family moved to CO where David enjoyed all outdoor activities. A rock climbing accident however forced him to sit and contemplate a future.

After deciding on theater he auditioned for a play which led to musical and voice lessons.

Walking into University of Colorado, he auditioned for their music school, where his vocal abilities welcomed him to their specialized program. His skill earned him acceptance into the top masters program for opera in Cincinnati.

He then participated in a program in Italy, followed by New York’s Academy of music. He then went on to prestigious programs in Portland and Chicago. Being part of a very elite and highly competitive group, most of his former peers are professional opera singers today.

While in LA, Babinet performed in the LA Opera.

Around this time, Babinet used his time, to pick up a new hobby; he learned how to brew beer.

In 2004, his appearance in an opera festival brought him on his first visit to Israel. While there, a Rabbi told him: “Your body is your main focus but your soul is weak, focus on nourishing your soul.” On his return to LA, a visit to LA’s Kabbalah Center left him underwhelmed. He then found Chabad through R Simcha Backman. The Shliach gave him a CD of Yossele Rosenblatt, which piqued his interest. David found it as a way of singing directly towards god, with meaningful lyrics.

David dived headfirst into yeshivah, having his friend pack up his LA home for him.

At 32, hew met his wife/ They married in Crown Heights where they live today with their kids.

By 2010, Babinet had studied and excelled in, the winemaking industry. Today, he provides full service bars for private and large scale events, a sought after and beloved character by all.