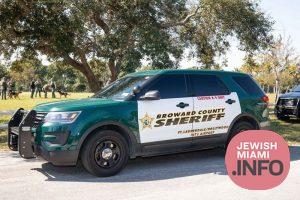 According to investigators, the first incident reported occurred in the morning hours on Oct. 5, a day of celebration for Yom Kippur, the most solemn of Jewish religious holidays. Several antisemitic and hate messages were spray-painted inside and outside the bathrooms on the golf course at Weston Hills. Additionally, that same day additional hate messages were found spray-painted on the children’s playground at Hunters Pointe Park in Weston.

A second incident was reported on Tuesday, Oct. 25, when hate slurs and antisemitic messages were found again spray-painted on the walls of the golf course bathrooms.

At approximately 8:26 a.m., on Sunday, Oct. 30, BSO district deputies responded to a call reporting yet another incident of racist and antisemitic messages spray-painted at Hunters Pointe Park and along the entrance of Hunters Pointe subdivision located at 2372 Quail Roost Drive in Weston.

BSO district detectives continued actively investigating these incidents and were able to locate and identify three juvenile males as the subjects responsible for these crimes. All three subjects were arrested and transported to the Juvenile Assessment Center for processing. Two juveniles face three counts of criminal mischief, two counts of burglary structure and one count of public order crime prejudice, which is a hate crime enhancement. The third juvenile faces two counts of criminal mischief and burglary structure.

At this time, there are no additional outstanding subjects involved in these incidents. BSO does not tolerate any act of antisemitism or any form of hate and prejudice.