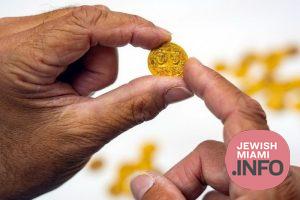 An Israel Antiquities Authority excavation revealed 44 Byzantine gold coins at the site of Paneas (later known as Banias), within the Hermon Stream Nature Reserve. The hidden coin hoard provides evidence for a dramatic moment in the history of the country – the Muslim conquest of the Byzantine Empire in the Levant.

Banias, now a National Park, is an archaeological site that was settled around a large spring in several periods, first established by Canaanites, who dedicated a shrine to the god Baal. In the Hellenistic period, Banias served as a cultic site to the god Pan (from whence the original Greek name of the site). The settlement reached its peak in the Early Roman period, when Herod the Great, and his son Philip II, entirely rebuilt the city and named it Caesarea Philippi, in honor of the Roman emperor Augustus.

In the Byzantine period, a church was built next to the spring. In 1129, the Crusaders undertook the fortification of the city to make it a military base from which to attack and conquer Damascus, but this was short-lived as the Moslems conquered the city in 1132 CE.

Dr. Gabriela Bijovsky, Israel Antiquities Authority numismatic expert, examined the coin hoard, composed entirely of gold solidus coins, and identified some coins of Emperor Phocas (602–610 CE), and many coins minted by Emperor Heraclius (610–641 CE). The latest coins of Heraclius date the coin hoard to the time of the Muslim Conquest of Byzantine Palestine in 635 CE.