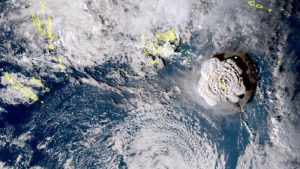 A tsunami advisory has been issued for parts of Alaska, California, Hawaii, Oregon and Washington after an undersea volcano erupted in the Tonga Islands.

The National Tsunami Warning Center, a division of the National Oceanic and Atmospheric Administration (NOAA), added that “some impacts are expected” along the West Coast of the United States.

The Pacific Tsunami Warning Center, also operated by the NOAA, had issued its own advisory for the state of Hawaii, warning that waves may be a hazard to swimmers, boaters, or anyone near the shore.