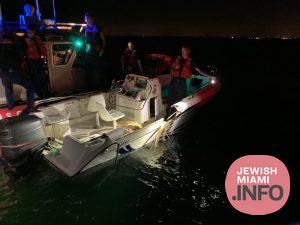 According to a press release from the U.S. Coast Guard, a person involved in the boat collision notified Coast Guard Sector Miami watchstanders of the incident at approximately 10:30 p.m., reporting 12 people in the water about 1 mile west of Key Biscayne.

The Coast Guard Station at Miami Beach’s small boat crews and the Coast Guard Air Station Miami MH-65 Dolphin helicopter aircrew responded to the calls for help, rescuing the ten boaters and recovering one of the victim’s from the water. A Miami-Dade Fire Rescue crew recovered the second victim.

According to a press release from the U.S. Coast Guard, a rescue swimmer was lowered to a Station Miami Beach small boat and assisted two critically injured survivors, transferring one of them to a Miami-Dade Fire Rescue crew who brought the survivor to Jackson Memorial Medical Center for higher medical care.

The incident is under investigation by Florida Fish and Wildlife Conservation Commission.