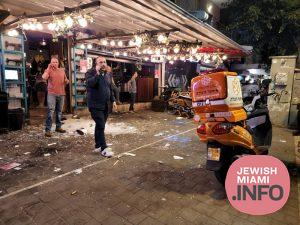 The Algemeiner and CrownHeights.info

Two people were killed and at least eight injured after a suspected terrorist on Thursday evening opened fire at a bar located along one of the busiest nightlife streets in the heart of Tel Aviv, marking the fourth deadly attack in less than a month.

Magen David Adom paramedics reported that two of the shooting victims in their 30s were rushed to a Tel Aviv hospital while undergoing resuscitation, before their deaths were determined. Another eight victims are being treated at a number of Tel Aviv hospitals, including three in their 20s and 30s seriously injured from gunshot wounds, and four in light to moderate condition with limb injuries.

An update from MDA:

2 males approximately 30 years old were conveyed to Ichilov while undergoing resuscitation. Following further medical efforts they were pronounced dead at the hospital.