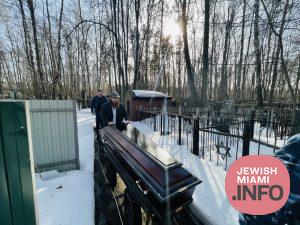 About a month ago, police in Moscow located an anonymous body in a remote and uninhabited place, and according to the tests, the man had died of extreme cold.

The police contacted the Israeli consulate in Russia, Mrs. Yaffa Ilowitzky, and they hurried to transfer the documents to the “Shaare Zedek Jewish Charity Center” in central Moscow. The center’s volunteers presented the documents to the Department of Jewish Investigations in Russia’s Chief Rabbinate, and after a thorough investigation, it became known that the deceased was a kosher Jew, born in Georgia, who immigrated to Israel alone and returned to Moscow a short time ago.

The heads of the Charity Center sent an urgent request to receive the body of the deceased for a proper Jewish burial, and the authorities agreed and released the body for burial. In collaboration with the Chabad emissary to the Georgian community in Moscow, Hakam Avraham Alshvili, all burial expenses were donated, and a dignified funeral was held at the old Jewish home ‘Malachovka’ in the Moscow suburbs, with the participation of a quorum of Jews