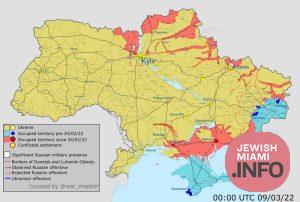 Russian President Putin announced the invasion of earlier this month, and immediately followed it with action. The following is a summary of incidents, numbers and breaking news on the war.

Russia is making costly progress in their effort to mass troops to the North,West & East of Kyiv & have destroyed supply routes to the city from the SW. But access & resupply remains largely uncontested from the south.