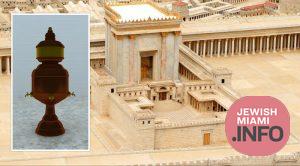 Weekly Dvar Torah: Descend For The Purpose of Ascend

There are two major out-of-character events recorded in this week’s Parsha.

1) The Kiyor, the wash basin in the Mishkan
2) The worship of the golden calf.

Both teach us about the purpose of creation, and the importance of the Jewish people.

In the previous two Parshas G-d instructed about all the components of the Mishkan, the entire structure and all the items and vessels needed for the Mishkan, except for the wash basin.

Finally, this week, almost like an afterthought, we learn about one more item, the washbasin.

Now this is interesting, according to the order of the service one cannot start any service in the Mishkan before you use the washbasin, so the order should have been to list the Kiyor first?

Here is the dichotomy, when the Jews contributed gold, silver, copper and wood to the Mishkan, the women brought their sparklingly shinning mirrors as a contribution.

Moshe was hesitant, should he accept these mirrors that were used by the women for beautification, to attract their husband, do they really belong in G-d’s house?

And G-d said, yes, I want these mirrors, because they were used by the holy Jewish women to tempt their husbands to have children with them in Egypt when pharaoh decreed to kill al newborns, they defied pharaoh when the men didn’t have the courage.

This, G-d said, was more important than anything else, they used their physical beauty to further G-d’s plan on this earth.

To Moshe this was not very clear, it seemed a bit odd to use such items in the temple, but G-d said that this material enticement perhaps looks un-G-dly, but this is a descend for the purpose for the ascend that follows, by bringing more children on this earth.

Then we learn about the worship of the golden calf, a clear revolt and defiance of G-d only 40 days after the giving of the Torah at Sinai.

G-d was angry, he wanted to destroy the idol worshippers, He promises Moshe that He will start a new Jewish nation just from him, and Moshe said no, this will not happen.

Moshe beseeched G-d for 40 days to spare these evil people, the ones who defied G-d and rebelled against Moshe and the Torah that he just delivered, he pleaded and pleaded until G-d said; I have forgiven as you requested.

What was Moshe’s argument? The first commandment is “I am the G-d who took you out of Egypt, you shall not worship any idols before Me” and like an in-your-face rebellion, the Jews did just that, can they be trusted, should they be spared?

Moshe argued, a Jew inherently is not capable of rebelling against G-d, so how is it possible that they actually did? Moshe knew that this is really G-d’s plan, He wants to introduce a new level in His relationship with His people, G-d wants to prove that even the rebellious are capable of doing Teshuva, of returning back home, like long lost children.

Moshe knew that the ultimate goal is that this descend will lead to an even greater ascend, inasmuch as a father loves his children, yet when his lost children return from a long difficult journey, the father is overjoyed like never before.

So, both, the Kiyor and the worshipping of the golden calf, highlight this message, that even what seems to look and sound like an un-G-dly act will ultimately lead to a higher and stronger relationship with G-d, the service in the G-d’s house and the path to Teshuva, returning home to G-d.

Don’t feel lost, you’re on your way back home, and this will be the happiest day for you and for G-d.

Have a homecoming Shabbos,
Gut Shabbos