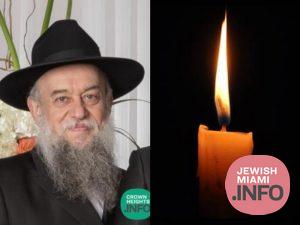 What Do You Notice?

This past Shabbos the Chabad community at large and specifically the community in Miami suffered a loss, with the passing of Rabbi Yosef Yitzchok Sossonko, who symbolized and personified the qualities of a chossid.

Being that he was a mashpia in Florida for the past forty years when I was discussing his petira with friends here in New York, our conversation shifted to his father, Reb Asher Batumer (as he came from the city of Batum).

Your feedback is always appreciated and enjoyed.

One of the stories which I heard and repeated to others is:

Before the lifting of the Iron curtain, organizations, family members and friends would send articles of clothing to Russia. The purpose was that the receiver would sell it on the black market and would be able to support his family with some comfort. For example, a raincoat that workers wear in a factory where there is a lot of water was valuable, it could support someone’s family for a month.

Once Reb Asher received a colorful raincoat and instead of selling it, he wore it to Shul. Another Jew there noticed it and said disparagingly, “Reb Asher, why are you wearing a woman’s coat? Don’t you see, it is right over left!”

Reb Asher replied, “You destroyed my enjoyment. For thirty years, I was hoping to have a coat [like chassidim would wear] right over left and I finally had one.[1] And now you inform me that it is a woman’s coat?”

I repeated it to some people and they smiled or even broke out in a grin. However, someone younger who had no idea who Reb Asher was, asked me what can they take from the story?

I replied, you are in chinuch and enter your class on a daily schedule. By now you know the students, who are interested in learning and who aren’t so motivated. Some of them may even have an attitude.

The question is when you enter your class, what do you see?  Do you see an opportunity to guide this student or do you see the attitude?

Reb Asher saw that it was colorful. The thought that it was a woman’s coat might have entered his mind. However, the thought that now I can wear a coat as a chossid should, was so overwhelming that any other thought was dismissed. So it is not black blue or grey, the typical colors which are worn by men, that to him was not an issue.

The same thing as a mechanech, the fact that a student is not interested or perhaps even displays an attitude, is not where you are focusing. What is important is that the student is right now in my classroom and I have an opportunity to influence the student and help him or her to see the beauty of the Torah. That is what my focus should be.

Rabbi Avtzon is a veteran mechanech and the author of numerous books on the Rebbeim and their chassidim.  He can be contacted at avtzonbooks@gmail.com

[1] The reason for this is that the right side represents or symbolizes kindness, while the left side symbolizes strictness or judgement. So it is as a prayer that kindness should cover up any judgement that may be against us.