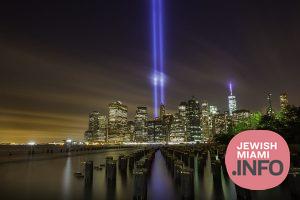 21 Years Later, Part 1: A Memoir From A Hatzalah Volunteer

In the days following the horror of September 11th, 2001 a Hatzalah volunteer, who was present at ground zero as the towers collapsed, penned the following memoir of the events of that day.

I am writing this note with tremendous Thanks to G-d that I am able to write about the recent tragic event that befell our country.

Tuesday September 11th started out as any other day. I was on my way to work when a friend stopped me to tell me that a terrible accident happened, a plane crashed into the twin towers! He stated that medics were being called up to help out. Being a paramedic with a volunteer ambulance corp. I rushed home, told my wife that a plane crashed into the twin towers, turned on my 2-way radio just as they were announcing that an ambulance will be leaving my neighborhood momentarily. I met up with the ambulance and eight of us headed on our way towards the towers. On the way there, as we were busy preparing for patient care (checking supplies, setting up I.V. drip sets etc.), the news came over that a second plane crashed into the other tower. At that point it was clear that the first crash as well as the second were no accidents, but acts of terrorism.

As we neared the city two off-duty police officers and one off-duty fireman jumped aboard our ambulance looking for a way into the city to help out as well. When we arrived at the scene we were directed to park the ambulance on West St. one block north of the towers. We removed our stretcher and loaded it up with emergency equipment. We were met by an EMS Lieutenant, joined together with five other crews (FDNY & fellow volunteers), and marched south towards the towers. As we proceeded closer, what appeared from a distance to be debris falling from the towers, were unfortunately human beings. The feeling of helplessness was tremendous, but the hope of helping those that can be kept our morale high.

We were stationed on West St. opposite the towers when a short while later my crew and I were overtaken by the south tower collapse. The sound was as if 1000 subway trains were heading towards us, the ground was shaking and everything appeared as if a person was video taping a scene while running. People started running in a panic away from the towers. I ran beneath the walkway that crosses over to the Financial Center as chunks of steel and concrete were raining down. I was able to hear above all the chaos the load thuds of debris falling on the walkway above my head. As I turned around I saw a wall of white dust and smoke followed by a wall of blackness rapidly approaching. The fear of the moment was unbelievable. I realized I would not have time to make it in to the Financial Center. I dove behind a detective’s car that was parked under the walkway as the rush of wind overtook me. The force of the wind blew out the windows of the building behind me. The person next to me, behind the car, was praying as the flying debris was pelting us. Luckily the car took the brunt of it as it was swaying in front of us. We were then engulfed in the thick darkness. An analogy was given to describe the feeling of being in this darkness as if one was trapped inside of a vacuum cleaner bag with no way of escaping where one could not see or breathe. I covered my mouth with my cap in an attempt to breathe. Even with the cap acting as a filter I still inhaled the dust and soot which stung and burned my nostrils and throat. My fear that the walkway above would collapse forced me to get up as soon as the air cleared a little so that at least shadows were visible. I made my way towards the blown out windows of the Financial Center building behind me. Once there, there was someone helping us over the ledge warning us not to step on the ledge and watch out for the broken shards of glass. I found my way to a convenience store and rinsed my mouth out from all the soot. I ripped off my undershirt to use as a face mask and proceeded back outside to see if I can assist anyone.

Walking outside was as if witnessing a surreal winter scene with everything in gray. Huge flakes of gray ash were falling on an already accumulated foot of ash and debris. No people were around. I saw one of our ambulances parked with the doors wide open. The inside of the ambulance was completely covered in soot. I took all the available face masks and emergency equipment that I can carry (unfortunately no available portable oxygen) and started walking out, when I was called into a demolished Chase bank to assist with the injured there. While in the bank, other members of the volunteer ambulance corp. came running in and told us all to evacuate towards the water, because the second tower is coming down. We all crammed into the ambulance that someone miraculously got started and drove (over all the debris) towards the water. When we came to a dead-end we all jumped out. We grabbed all the emergency equipment that we can carry and proceeded south along the water’s edge assisting the injured and advising people to cover their mouth and nose so as not to inhale the soot.

Boats started pulling up along side the walkway. We assisted the NYPD and NYFD in evacuating the injured, woman, children, and elderly followed by all able bodied people, over the gate and onto the boats which were headed for New Jersey. After receiving a report of a possible gas explosion all remaining emergency service workers were asked to evacuate to NJ as well. Watching the New York skyline from the ferry, feeling the cool fresh breeze against our faces and watching the fighter jets flying above, awakened us to the magnitude of what had just occurred.

Upon arriving in Jersey City remnants of our volunteer ambulance corp. set up a triage center with our remaining equipment. The help of the NJPD, construction workers and people from the surrounding office buildings were unbelievable. The construction workers helped to clear paths around the construction site to allow people access to the city streets. Local businesses were supplying additional medical supplies, clean towels and water. Volunteers were distributing fresh cold water to the throngs of people coming off of the ferries. The unity and kindness of all people during this crisis truly showed the world the best of what this great country is made of.

After several hours local NJ ambulance crews relieved us. At that point we were called up to help out back in NYC at Chelsea Piers. We were offered a lift by a NY Waterways ferry back to NYC. Upon arriving at Chelsea Piers fellow volunteer ambulance crew members felt the events of the day crash upon them and they themselves needed medical attention. I placed myself and two other crew members on an ambulance and applied oxygen masks to ourselves. We realized at that point it is time to allow all other emergency workers and volunteers to relieve us. We were driven back home to a private physicians office where we were all checked out some requiring medication for their eyes and lungs and others requiring suturing.

During this dreadful day my wife was caught up in an emotional roller coaster. Upon watching the towers come down on television she realized that I was there and may be trapped. It took a couple of hours for her to find out that I was okay.

Upon arriving home at approximately 6:00 PM, walking up the stairs, an announcement came over my 2-way radio that all of the over one hundred volunteers from our volunteer ambulance corp. were accounted for and only three will require hospitalization. Being reunited with my family, together with the news of all fellow members being accounted for, brought tremendous joy and relief to my family and I. Upon removing my vest and clothing the amount of blood and soot that covered them, as well as the amount of debris and glass in my pockets and shoes, made me concerned that I myself may have injuries that were overlooked. Thank G-d I only came out with two scrapes, bruised shoulders (from carrying all the equipment) and a cough due to throat and lung irritations.

Some of the good from this terrible tragedy is already visible. The unity and caring of this great country has been revealed. The awakening of the world to the reality of terrorism has sent a message that terrorism must be eradicated.

Let us hope and pray that all families affected by this great tragedy will be comforted and find the strength to persevere.