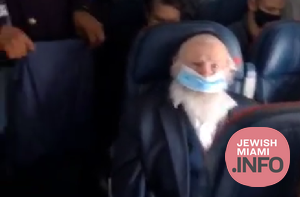 Making Aliyah is for many a high moment in their life. For Gerald “Jerry” Wittenstein, it was an especially incredible moment.

Flying on Delta from his home in Huntsville, Alabama, Wittenstein and his wife found themselves the center of attention as the Delta crew gave special mention to the couple.

Gerald Wittenstein is the CEO of NASA’s International Space Systems and worked alongside American astronaut Neil Armstrong and developed half of Apollo 11’s trajectories. He also a loyal Delta Airlined customer, being with them for over 20 years.

The special mention by the Delta crew ended with a message from their grandchildren, who wished them “a happy and joyous life in your next chapter in Israel.”