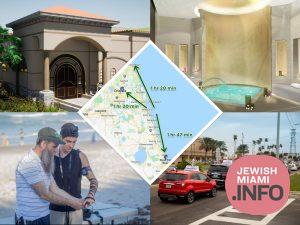 Chabad of the Space & Treasure Coasts Raise for Florida Mikvah

Purim just marked the 31st anniversary of the launch of Chabad of the Space & Treasure Coasts. Rabbi Zvi & Shulamit Konikov were sent on Shlichus to the Space Coast to service the needs of the growing Jewish community.

In the 31 years since, Chabad of the Space & Treasure Coasts has expanded to help grow the community of the 7,500 Jewish residents of Brevard and Indian River counties.

However until now there has been no local mikvah. And that is about to change with the Space Raise – a 72 hour matching campaign running through Thursday, March 31, to help build an urgently needed mikvah in Central Florida. Similar to the space race of the 1960s, the Space Raise is also on a vital mission to help plug one of the largest gaps in the state of Florida – a span of some 200 miles without a Mikvah.

The closest mikvah currently is located 1 hour and 20 minutes (and 90 miles) to the north in the Daytona Beach area. Orlando, while geographically closer, is a longer trip as highway access is not as direct. The closest mikvah to the south is even further, near West Palm Beach, a 120 mile distance.

This poses quite a challenge for the many women who need to travel such a far distance to observe this essential mitzvah. And even more importantly, this makes it very difficult to encourage others to start observing Taharas Hamishpacha.

The Space Raise campaign is about to change all that. Chabad of the Space & Treasure Coasts was recently able to acquire a large property directly off the I-95 from the local reform synagogue, allowing Chabad to expand its reach and a superb location to build a state of the art mikvah. Being right off the I-95 will provide easy access for community members and visitors alike, traveling from across Brevard, the state’s largest county.

While Florida may seem to have ample access to natural bodies of water, what lurks under the water is what keeps most residents out of the water at night. In addition to the Halachic complexities of using the ocean, Florida is the shark-bite capital of the country and is known even internationally, accounting for roughly 30% of all shark bites in the world each year. And even within Florida, the Space Coast region is known as the second most dangerous, with 155 recorded shark attacks. The lakes serve as no refuge either, as Florida’s waters are home to alligators, all underscoring the vital need for a local mikvah.

While embarking on this campaign, Rabbi Zvi Konikov came across a letter from the Previous Rebbe, dated 11 Kislev 5709, December 13, 1948, written to Rabbi Mendel Feldman. Rabbi Feldman had served as a Rov in Jacksonville, Florida, and the Previous Rebbe inquired about the state of Mikvah and chinuch in the areas he had recently visited, Daytona Beach and West Palm Beach.

This was striking to Rabbi Konikov, as currently these are the exact two locations, to the north and south, where people are directed to when looking for a mikvah – with a 200+ mile gap in between. The Previous Rebbe’s interest in worrying about a mikvah for what was a very tiny Jewish community in the 1940s only further emphasized the need for the growing Jewish community today.

This 72 hour campaign will help fulfill the vision of the Previous Rebbe in ensuring there is a mikvah for the local Jewish community and help Yiddishkeit blossom on the Space Coast.

To learn more about the Space Raise campaign and become a partner visit www.spaceraise.org