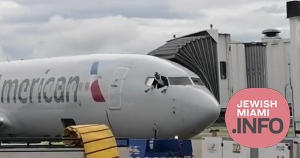 You can’t make this stuff up.

American Airlines flight 488 from San Pedro Sula in Honduros to Miami got off to a bad start Wednesday when a passenger rushed the cockpit and decided to wreak havoc.

“During Boarding, an American Airlines passenger charged down the Jetway and onto the aircraft,” a report on social media wrote. “The man entered the open cockpit and damaged the flight controls.”

Video from the incident shows the man, head and shoulders out the window, conversing with ground crews.