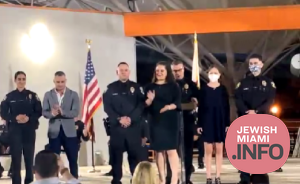 Topper, who is a five year veteran of the NYPD, previously served in the 77th Precinct in Brooklyn, which covers the north end of the highly Jewish area of Crown Heights.

Thanking the police chief and city officials, Topper explained that being a Shabbos observant Jew makes working in law enforcement difficult, but he hopes his move into the North Miami Beach Police Department will make it easier on others.

The swearing in ceremony held Thursday night featured multiple Rabbi’s and community leaders, who spoke of the historic value of swearing in an Orthodox Jewish officer.