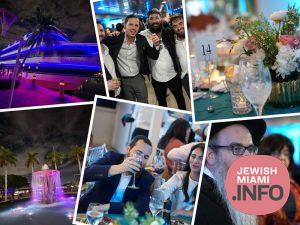 Chabad of South Broward hosted their 41st Annual Dinner Sunday as they announced the expansion of their upcoming projects by nearly one hundred percent.

Dinner Co-Chairmen Ephraim Kaufman and Shui Kastel, along with Event Coordinator Dorit Antian made this Dinner the most successful, lively and joyous in the history of Hallandale and Hollywood Dinners, with Gad Elbaz bringing all Dinner guests to the dance floor for nearly a full two hours.

Accompanied by musical performances by Choni Teitelbaum and Wine Tasting by Ricardo Kasinsky, this year’s well deserved Honorees were announced as Gustavo and Carina Lancewicki, who received the Oiseh Chesed Award. Alejandro Chaberman received the Hallandale Developer of the Year, and Batya Levy and Chanie Israel were awarded the Eishet Chayil Award.

Also presented at the event was the Dugma Chaya Award to Aryeh and Raizy Greenberg, alongside the Young Leadership Award to Shabsi and Sheina Kabacznik.

The major expansion to Chabad of South Broward’s plans is badly needed as thanks to the Rebbe’s blessing, as Chabad’s dozen of institutions in Hallandale are bursting at the seams. A huge influx of families to Hallandale and surrounding neighborhoods, has made it necessary to expand the Shul grounds to include more pre-school, Hebrew School and adult education classrooms, a CTeen and Friendship Circle Youth Center, parking garage, a Women’s Balcony, expanded Teacher’s Seminary, proper kiddush/social hall and much more.

At the event, Rabbi Yossi Lebovics led in the recital of Tehillim and Rabbi Leizer Barash read a letter to the Congregation from 1985, in which the Rebbe added a paragraph about his holy father, Rabbi Levi Yitzchok, after whom Chabad’s first Synagogue in Broward is named.

Rabbi Raphael Tennenhaus announced that the Dinner was 30 days before Simchas Torah, and the entire Dinner had the air and spirit of the upcoming holy day.

Festivities took place on three floors of a luxurious Yacht, with dinner guests left confident and uplifted, that they are entering the New Year 5783, תשפ״ג, in a manner of תהי׳ שמחה פורץ גדר, a year that the Simcha will break all barriers with the imminent revelation of Moshiach.

Pictures and video by Mendel Mish