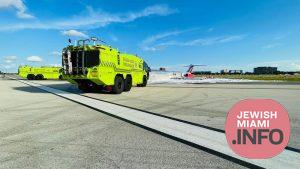 A Red Air flight from Santo Damingo suffered a landing gear malfunction during landing a Miami International Airport, leading to a fire and minor injuries.

Red Air Flight #203 landed Tuesday evening during which the landing gear by the nose of the plane collapsed, sparking a fire.

Miami Dade Fire responded, extinguishing the blaze in a display seen from the nearby highways, and treating three people for minor injuries. They were transported to local area hospitals.

Some flights became delayed over the incident.