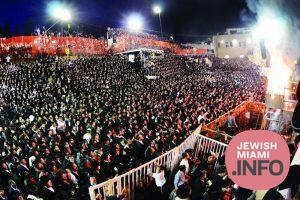 LIVE: Join The Simcha of Lag B’Omer In Meron

Hundreds of thousands of Jews are in Meron on Wednesday Night May 18 2022 to celebrate Lag Ba’Omer. The holiday marks the passing of Rabbi Shimon Bar Yochai (Rashbi).

The commentary on the Pentateuch called the Zohar (Shining Light), the classical source of Jewish mysticism, is attributed to Rashbi, who lived in the 2nd century C.E, died on Lag B’Omer and is buried in Meron.

The Talmud tells how Rashbi was forced to hide in a cave with his son for twelve years in order to escape the Romans who wanted to kill him for rebellion. During this period, the Talmud relates that a carob tree and spring of fresh water were the pair’s only sustenance, and that he and his son reached spiritual heights in Torah study and kabbala that made their return to the everyday world a difficult transition. Rashbi is revered as a mystic, supremely pious sage, who did not engage at all in worldly pursuits.

The night of Lag Ba’Omer, The Boyaner Hassidic Rabbi lights the first flame of the festivities at midnight and the thousands who have come to Meron continue to sing and dance through the night, chanting the refrains of various songs praising Rashbi, expressing the joy of being a Jew, calling on G-d to deliver His people from danger, and describing their confidence that He purifies them from transgressions.

Among them are many three year old boys, brought by their families for their first haircut, called “chalaka”, which Hassidim do traditionally in Meron on Lag Ba’Omer.

Tens of thousands of people are expected to flock to Mount Meron on Wednesday night to celebrate Lag Ba’omer, exactly one year after 45 people died there in a stampede.

The disaster took place close to 12:45 a.m. when Lag Ba’omer fell on April 30. It began when about 20,000 haredi (ultra-Orthodox) men and boys left a bonfire held by the Toldos Aharon Hassidim at a compound near the tomb of Rabbi Shimon Bar Yochai.

They headed down a narrow passageway known as Dov Bridge, which ended in a 90-degree turn to the right and then 11 stairs down to ground level. The stairs were narrower than the passageway, creating a bottleneck. When a few people slipped, a human crush began, resulting in the largest civilian disaster in Israel’s history.

Over the past year, the government has ordered extensive changes at the site, demolishing illegally built structures, including Dov Bridge, and widening existing passageways.

“This is a complicated event since there are many changes that were done to the site and to the way things were,” Israel Police Northern District Chief Shimon Lavi said. “There are limitations on the number of people allowed on the mountain, so only 16,000 will be permitted there at any given time.”

The event is being coordinated with the Religious Services Ministry, whose minister Matan Kahana, stepped down on Friday due to internal Yamina Party politics.

Tickets need to be preordered and will serve as both transportation and entry passes. Entry will be staggered, with 4,000 people allowed per hour. They will be given passes for a four-hour stay, meaning that no more than 16,000 pilgrims will be on the mountain at any time.

“If you do not have a ticket, you have no business coming to Meron,” Lavi said.

No private vehicles will be allowed to approach the site, and all public and private transportation will be diverted to 11 bus terminals, from which shuttles will ferry people to the compound.

One bonfire-lighting ceremony will be held; food will not be sold on-site; people will visit the tomb in a moving line, with separate entry and exit lines and a short duration by the tomb; and a tent will be set up outside for those who wish to remain and pray.