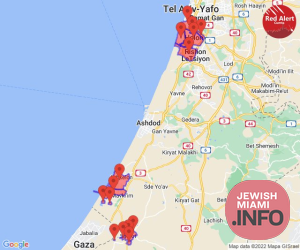 The tensions that rocked the Gaza envelope Friday continued unabated over Shabbos, with over 350 rockets having been fired at Israel. Here is an update of highlights from the last 24 hours.

– Egyptian has allegedly sent a delegation to Israel in order to broker a ceasefire in Gaza.

94 fell short in Gaza.
29 fell in the sea
162 interceptions, with 95% Iron Dome success rate for rockets headed for populated areas.

– The United States and the United Kingdom have publish official statements supporting Israel in its war against the Islamic Jihad.

– The Hamas-run health ministry in the Gaza Strip says 24 people have been killed and 203 others wounded since Israel began its military operation in the Gaza Strip. Israel says this toll includes the failed rocket launch in Jabaliya, that killed at least 7.