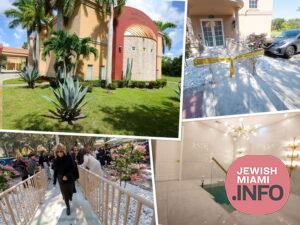 Siyum of Sefer Taharah Marked by Completion of New Mikvah in Boynton, Florida

The Rambam’s Yahrzeit 20 Teves came two days before the Siyum of Sefer Taharah, the 10th Sefer in Yad Hachazakah.

The Siyum was on Sunday 22 Teves and on that day hundreds gathered to dedicate Chabad’s newly remodeled Mei Menachem Young Family Mikvah of Greater Boynton, Florida.

“Obviously when planning the date, we had no idea that they coincided,” said Rabbi Sholom Ciment, Head Shliach of The Greater Boynton region of Florida. “The best algorithm couldn’t have produced such an awesome Hashgacha Protis.”

Rabbi Sholom & Dinie Ciment established Chabad in this central Palm Beach County region over 28 years ago. They arrived to a spiritually desolate region with nothing in terms of Jewish infrastructure existing.

The Mikvah was one of the first institutions built by Chabad 10 years after they arrived. At the time it was the sole mikvah for many miles in any direction. As such, it quickly became in high demand. Due to this blessed use and a now booming growth of their community, time had come to give the Mikvah a sprucing up.

An ever-growing young secular community that has grown attached to Chabad through its award-winning Pre-School drove a decision to utilize this opportunity to transform the Mikvah into something uniquely beautiful. An edifice whose natural allure would draw the interest of young Jewish women for their practice of Taharas Hamishpacha.

A high-end interior designer was engaged. The entire inside of the building was gutted. The resulting brand-new interior sparkles in white marble tile, full glass walls, ultra-modern prep-rooms, lighting and furnishings. Cutting-edge technology was installed to control every aspect of the facility and every conceivable halachic upgrade was integrated.

At the Sunday event, seasoned attendees joined those there for a first time in describing a wedding-like energy, “it was like a wedding of heavenly splendor to an earthly abode.”

The “cold” (55 degree) weather forced the morning program; “Spa for the Soul,” indoors. Its warmth and inspiration though will be remembered for a long time to come. After an elegant breakfast, an impressive gathering of women joined guests and dignitaries outdoors for the ribbon-cutting of the newly remodeled Mei Menachem Young Family Mikvah.

Among the attending guests was a 12-man contingency who came specifically for the event from Lakewood New Jersey. Each of these young married men had donated through the renowned foundation Mikvah USA to partner with the Boynton community in shouldering the hundreds of thousands of dollars for this major reconstruction project. This group’s sole objective was to seek heavenly mercy on behalf of a friend in Lakewood, a young couple, who have yet to be blessed with children. Their pure act of loving kindness was heightened when they insisted that their friend never know of their efforts.

There wasn’t a dry eye as Rabbi Ciment read the last Halacha, the Siyum of Sefer Taharah which reads more like a Brocha than a Halacha. The auspicious gathering galvanized the power of Tzeddakah to build this new Mikvah with a Siyum, specifically of Sefer Taharah and Hilchos Mikvaos, and the Baal Hahilulah The Rambam’s words of “Brocha,” all to effect On-High that the couple be imminently granted the G-dly gift of a child.

The sacred event was also used to “spiritually” launch an even more ambitious $7,000,000 Capital Campaign Expansion of the entire Chabad Campus. The visiting New York based Mikvah philanthropist shared in his remarks that in the few hours he had been in the community he has realized the urgency, and vast potential, of this Campus expansion campaign and offered his own additional pledge to its success.

Chabad’s Campus for Living Judaism encompasses Sanctuary spaces for hundreds who attend multiple standing room only daily and Shabbos services, an award winning Pre-school whose student capacity was doubled this year but still has an agonizingly long waiting list of children awaiting more space. The new Mikvah has an adjacent Keilim Mikvah, and a men’s Mikvah is being planned. A very active Community Kollel, Jewish Woman’s Circle, CTeen and JLI flagship center on the Campus complement a vast array of outreach programs emanating from it and serving thousands throughout the region.

Chabad’s Executive Leadership Capital Committee has secured to date $2.5mm of gifts and pledges towards a first phase goal of $4mm. After Sunday’s powerful event, the blessings will surely flow through to the completion of this monumental $7,000,000 expansion campaign.

On slate to be built is a new wing for the school with 10 additional classrooms and specialty centers, a banquet and catering hall for 500, an additional Beis Medrash, library and a new outdoor recreational plaza for the children together with the expansion and remodeling of all of Chabad’s existing facilities.

When finished Chabad’s 5 acre Campus for Living Judaism – Beis Menachem, will be readied to serve the region’s blossoming Jewish community ever more effectively as it enters its third decade of tremendous growth, and for generations to come.