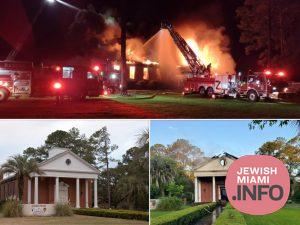 Tallahassee Chabad Burned To The Ground In Possible Arson Attack

The Lubavitch Jewish Center on Chapel Drive in Tallahassee was completely destroyed early Sunday morning in a fire that is under investigation for possible arson.

According to the Tallahassee Fire Department, they responded to reports of the fire at around 3:21am Sunday morning and arrived to find the flames showing and heavy smoke billowing from the roof.

Firefighters attempted to enter the building, but due to the extensive fire and integrity of the aged building, were forced to remain outside, and fight the fire in a “defensive” way.

Rabbi Schneur Oirechman, the Chabad Shliach, told local media outlets that “Thank god no one was hurt,” although it has become clear that the entire structure, as well as the Sifrei Torah, were completely destroyed.

Chabad-Lubavitch of the Panhandle was established in 2000 and serves the Jewish student population at Florida State University and the general Jewish community in Tallahassee and beyond. Rabbi Schneur Zalman Oirechman, co-director of Chabad-Lubavitch of the Panhandle, with his wife, Chanie, says the loss is devastating. “The Moris and Lillian Tabacinic Chabad Center served as a center for Jewish life for the last decade of our 23 years serving the Tallahassee Jewish community. It had become a beacon of light, full of the beauty and joy of Jewish life,” Oirechman told Chabad.org.

While it is still too early to understand exactly what happened, the local authorities are taking the fire very seriously, and are investigating to discern if any foul play was involved.