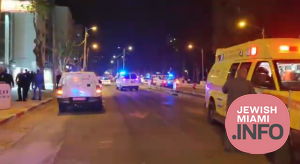 Two police officers were killed and four people were wounded in a terrorist shooting attack in the coastal city of Hadera Sunday evening.

The ZAKA emergency response organization said that three people were treated at the scene, including one in serious condition and two in moderate condition.