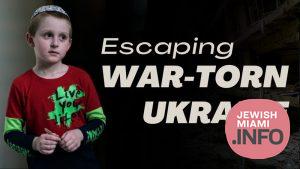 Filmed during the Ukrainian War’s harrowing opening days, a new short film tells the story of the women and children of Chabad Odessa’s incredible escape to Berlin, and features first-hand stories from refugees, Chabad shluchim, and the ordinary people who put their lives on pause to help their brothers and sisters in need.

As the last children from Odessa’s Mishpacha Orphanage clambered aboard the buses, Rabbi Avraham Wolff took his son Rabbi Menachem Wolff aside. “You’re in charge now,” he said. “Get the children to Berlin safely, make sure they are cared for there, and get them back to Odessa safely.” In the film, Rabbi Menachem Wolff recalls, “he gave me a few phone numbers and blessings for the journey.” So began a fifty-three-hour journey to safety in Berlin.

When they heard that the children were bound for Berlin, the community sprang into action. The film shares first-hand accounts from Berlin Chief Rabbi Yehuda Teichtel, who immediately met with government officials, a chef Shloimy who worked tirelessly to prepare for the children’s arrival, and Ester Miriam Golomb who was one of several who immediately booked flights to Berlin to help care for the children. Created by Avi Winner, Chesky Vogel and Mendel Banon of the Ukraine Jewish Relief Desk at Merkos 302, the film features first-hand testimony from Jewish refugees, university students and teenagers who fled Odessa with Chabad Odessa.

Help cover the tremendous cost of hosting the refugees by donating to Chabad of Berlin at charidy.com/berlin

For more information on Chabad’s response to the war in Ukraine visit ukrainejewishrelief.org