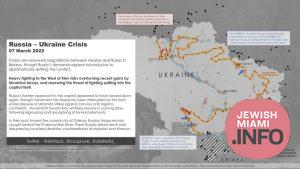 (UPDATED 10:09PM) Sanctions Continue To Pour On As Russian Offensive Continues to Crawl

10:06pm: Analysis from Sen. Marco Rubio: At some point Putin will start targeting the supply convoys bringing weapons & aid once they cross over into Ukraine. This could bring Russia’s missiles & aircraft in very close proximity to deployed NATO forces in Poland.

10:00pm: Putin knew we was going to get sanctioned after he invaded. He was planning on using Russia’s reserves as a buffer. But according to State Dept, virtually all of their foreign currency reserves are frozen & inaccessible to them.

3:49pm: Poland has announced that it plans to hand over all of its Mikoyan MiG-29 jet fighters to Ukraine via the United States.

3:48pm: McDonald’s will temporarily close all its 850 restaurants in Russia.

10:35am: Reports indicate that a staggering 40K foreign fighters have poured in to fight with #Ukraine against Russia.

10:33am: Japanese payment system JCB suspends operations in Russia. Cards already issued in Russia will not be available abroad from March 14.

10:32am: Russian Losses according to Ukrainian armed forces:

10:31am: Japan has declared today that the southern Kurils currently occupied by Russia is Japanese sovereign territory. creating another possible altercation in this war.