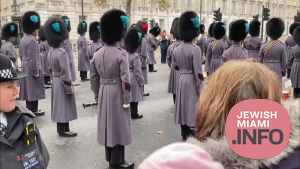 Video of the Day

What could be more inspiring than to hear a famous, and rather catchy, Jewish tune being played on the streets of London…by a military band…as part of a royal parade? This video was captured outside the Cenotaph War Memorial.

The music for the parade was prepared as part of the arrival of Britain’s Chief Rabbi Marvis and some Holocaust survivors at the Memorial.