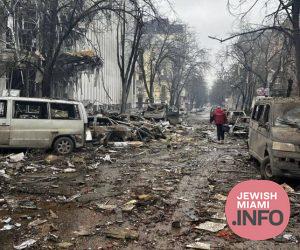 11:03am: Picture evidence from Ukraine indicated that two Russian SU-25 fighter jets were shot down today:

10:37am: According to the Ukraine Military, Russia exhausted most of its operational reserve in Ukraine.

Russia has begun transferring troops from its Southern and Eastern Military Districts to replenish its ranks, according to the General Staff of the Armed Forces of Ukraine.

I can’t emphasize enough how much #Putin & his risk calculus have changed. He will push Belarus into war, use chemical or biological weapons, slaughter millions & impose Stalinist restrictions in #Russia to avoid humiliation or the perception that he was forced to back down. It would be a catastrophic mistake to make decisions based on the #Putin of the past. The sense of grievance, the suspicions, the hubris of viewing himself as #Russia the obsession with control, have all gotten worse & he will do things now he would have never done before. There will be a steady increase of internal restrictions in #Russia over the next few days. In less than a week Russians will be living under Stalin era rules.

9:18pm: The Zaporizhzhia nuclear power plant is presently the sight of a battle. The following is an update from Sen. Marco Rubio:

Russian soldiers have breached the main building of the #Zaporizhzhia nuke plant in #Ukraine. Active firefight is going on inside a facility that is already on fire and controls 6 reactors.

Firefighters unable to fight the fire because they are in the middle of a combat zone. Like most nuke plants the one in #Ukraine under attack is built to withstand a direct hit from an airplane crash The problem is a loss of power or a shell draining the pools used to store spent fuel.

If that fuel isn’t cooled it can melt & release large amounts of radioactivity. Second Ukraine official just now says reactor was “hit” & is inactive with fuel inside but that its the admin building which is on fire. He had received no information about elevated radiation levels. Says meltdown unlikely but leak is possible. No other verified info available

3:12pm: Russian and Ukrainian negotiators have agreed on the creation of humanitarian corridors for the evacuation of civilians from combat areas in Ukraine, Ukrainian presidential advisor Mykhailo Podolyak said Thursday.

1:58pm: As per Sen. Marco Rubio “The chances of #Belarus joining in the invasion of #Ukraine are very high and (in my opinion) near certain.”

1:55pm: Ukraine and Russia agreed to hold a third round of talks soon, as Ukraine did not receive the results it had counted on.

12:12pm: Germany and Norway break from tradition and export lethal arms to Ukraine.